Impact : Women as Changemakers and Leaders 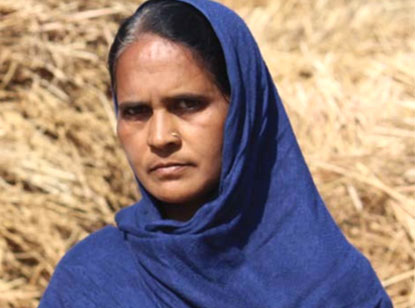 Changemakers of MISSI(women's wing of CSS ) are people who one way or another are ‘makers of change’, embracing change in their own lives, and promoting change in the institutions of which they are a part – in the family, household, community, voluntary and private sectors, and the state. They have chosen not to be bystanders. Such is the story of Roshan Ara.

Roshan Ara lived with her grandparents and her grandfather being a progressive person encouraged her to study and also go out and learning new things. However her parents got inﬂuenced by the community people and started restricting her movements and eventually married her off at the age of 16. Marriage began with lot of challenges for Roshan being in an abusive relationship where her husband would practically hit her every day! The family members would join her husband to abuse her

physically, emotionally. Roshan tried to go back to her parents on several occasion but would eventually go back to her husband. After one year Roshan decided to finally leave her husband. She got admitted to college and wanted to continue her education. Eventually her husband was able to take her back to his house only to confine her and abuse her. Roshan’s niece once invited her to attend a meeting in the village where other women in the village were present. Roshan was excited after the meeting because after many years she was able speak openly without any fear. She was also surprised to find many women part of this meeting and also a group facing several challenges like child marriage, dowry, domestic violence. Roshan decided she would be part of this group with much resistance from her husband and family. She became a regular member of the group and so panchayat members, many key persons in the village started interacting with her over regular affairs of the village.

Her husband, her family and the community realized Roshan’s importance in their spaces. This time Roshan didn’t give up and continued her work as women’s group member. She realised that women faced violence throughout her life because society treated women of less value so most of the women in their community couldn’t get the opportunity to explore their strengths and family, society, especially men were not allowed them to go outside, tried to restrict their mobility.

Roshan was criticized a lot by the community men. Sometime women also gave up and irregular in group meeting or couldn’t attend important training programme outside their villages. She faced lots of challenges to sustain their groups but she never gave up, she motivated all the women to keep touch with the group. And when the group savings increased and women had started taking loan from the group fund and able to support their families then their family members, especially men understood the value of the women group.

Roshan had a good rapport with the panchayat members, local health department. They nominated her name as a community based health worker (ASHA worker). Then she started to perform another important role in her village. As ASHA worker she has been taking care of all the pregnant and lactating mothers of her Gram Panchayat. She also arranged referral services in the medical emergencies. She loves this role very much. Once she contested in local panchayat for the position of Panchayat Pradhan prodded by her group members and community people but lost by a very low margin. As Roshan says, “Through my life experiences I have observed that women have very less value in their family, community and various forms of deprivation is due to this.” Roshan wants to ensure that no girl in her community is deprived of her rights including her right to education as well as their status in their family, society is an empowered one.

Urmila’s frst experiences in her husband’s family were unpleasant; she was a girl from the town who had to adjust to the village culture and practices. The family had very basic income from a cycle shop whereas most men in the household were into drinking. Urmila being a lively young girl would play with her sister in-law and very soon went on to have her first child at 18 and consecutively three children! Urmila remembers that she had no awareness about family planning or contraception, which she talks about to other young women now. She had no choice about having the children. Urmila got busy managing a difficult household, her marriage and the children but these pressures couldn’t take away the zeal in her. A member of CSS spoke to her about their work with women and girls and suggested Urmila to meet Sachiji. Urmila was inspired by her visit to CSS and started working as a volunteer connecting other women and girls to the groups. Around the same time Urmila became a 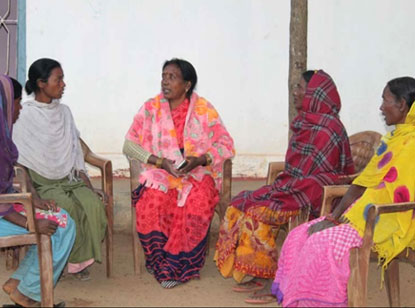 Sahayika contesting the Anganwadi chunav. Through CSS and MISSI and her role in the Anganwadi, Urmila would reach number of women talking to them about their health, their rights . Urmila was member of a 25 member team who were sent on an exposure visit by MISSI to the state of Chattisgarh to understand the functioning of the PRI system, roles and responsibilities taken up by the Mukhiya. Urmila was a fast learner and her participation was in such visits, meetings, were not only an opportunity for her but she would bring back interesting learning to her SHG members. These experiences and motivation of the village members inspired Urmila to contest the Panchayat elections in 2010 which she won. Urmila had to give up her position as Sahayika. Through her exposure with CSS Urmila would take out rallies, talk to women about rights, about reservations etc. which were added support to her role as the Mukhiya. Urmila was happy that she was in a leadership position where her decisions would be valued. Urmila says being a woman Mukhiya helped many women in the villages to take her help.

Women facing violence at home would not be as comfortable talking to a male! Being a Mukhiya, says Urmila gave her mobility because she would have to reach anybody in trouble even at night time. Urmila contested the elections in 2015 and again won by a huge margin. From the PRI she visited Kerala for an exposure and was inspired by the women and their hard working and energetic nature.

Urmila continues her association with CSS because it gives her new avenues to learn and exchange ideas. Recently she has been able to know about disability rights, about child rights, and these information only add to her role as a Mukhiya. Urmila says her achievement as a Mukhiya has been to take up different programmes and implement them successfully, e.g. her Panchayat and all villages are ODF. Urmila says trafficking, witch hunting, early and child marriage are issues that are still a challenge in her village but she knows she has to work towards changing these situations. In 2013 Urmila passed her Class X examination and so her personal achievements and growth as a woman is equally an indicator for success to her.