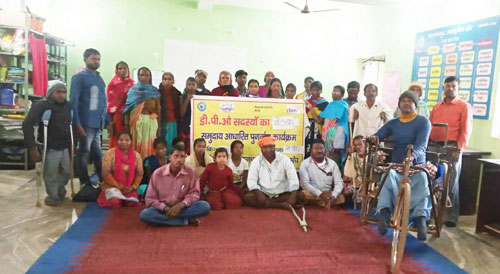 Follow up They regularly followup with the beneficiaries and monitor the progress for certification, govt. scheme linkage and other project activities.

Camps They actively involve and help in coordinating various camps

Certification They help the PwD beneficiaries for disability certification and assist them in documentation and application generation.

They provide supportive role in capacity building trainings, awareness campaigns and other events.

Advocay CSS is intensively involved in advocacy for the rights of PwDs at Community, District & State Level. At the State Level JDJM is very well recognized and accepted by the State Disability Department. At the State level JDJM has played an instrumental and leading role in advocating the following :

Enhancement of Disability Pension JDJM played a pivotal role in enhancing the disability pension in the state from Rs. 600 to Rs. 1000/-
Apart from this JDJM has been involved in advocacy for a long time for the appointment of special teachers in govt. educational institutions. JDJM
is consistently following up with the Disability Department and other relevant govt. departments in this regard.
JDJM works closely with the State Disability Department to raise awareness on acts and provisions pertaining to PwDs in the State.
JDJM was acknowledged and also received appreciation certificate from the State Election Commission for active role in the Accessible
Voting Campaign during the State Assembly elections. Around 60 DPOs under JDJM(CSS) actively involved in this campaign.
JDJM liaisons and coordinated with State Disability Department to organize mobile courts and assessment campaigns in various districts of the
State.