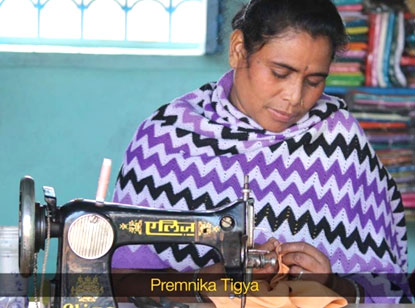 Having polio detected in both her legs at a very early age made Premnika walk on her knees. She was considered a bad omen for the family by many as they did not understand the concept of Disability, however, it was her father who stood by her side. He encouraged her to enroll in the village school.

Soon she realized that the school would also be a challenge as nobody would accommodate her needs. Premnika wanted to learn but she started believing that her dream of becoming educated could never see the light of day. Premnika was 13 when she got to know about a school that catered to special children. Without informing her parents, she secretly enrolled into the school where she was also oriented on vocational skills. When Premnika was 19, one of Premnika’s teachers in the special school supported her to get her legs operated.

Unfortunately after her teacher’s demise, Premnika was extremely disheartened and dropped out of the school. She then spent several years Meanwhile her family conditions worsened which affected her mentally and emotionally. Where on one hand she had to overcome the challenges due to her disability, Premnika also had to do something extra ordinary to support her family. Premnika then learned tailoring from a person in the village and decided for using her tailoring skills to practice. She took a small informal loan to start a tailoring business from her home. However, the community offered resistance in her way as the people doubted her capabilities and constantly reminded her of her disability.

The discrimination and resistance discouraged her to take up the business and she gave up on her plan. She spent several years doing petty jobs and in between some tailoring assignments in a small shop. When Premnika was identified by the organization, she expressed her dream to have her own business and that she needed social, emotional and financial support to pave way for her better life. For the first time she got positivity from people around her; she was even appointed to teach tailoring to other girls and women, including differently abled people and went on to teach almost 200 women and girls. Her association with CSS helped her to support and fight for the rights of disabled people especially girls and women. Premnika formed 8 to 9 self help groups in her village and oriented them about their rights and encouraged them to collect group funds and motivated women to become economically independent. She saw the vision of ‘Women as Entreprenuers’. She says that disabled persons, especially if she is a woman, become a stigma for the society and CSS offers a platform to such women to establish themselves and find their dignity and identity. After her marriage Premnika also had to face violence from her abusive husband. However, through constant guidance and counseling, the couple is living a better life now. They have a daughter who is visually impaired. However, Premnika is confident that she will be able to support her daughter because being a person with disability herself she can very well understand their needs and challenges.

Premnika is a successful business person today. She has her own shop, has appointed women tailors to meet the large orders that she is able to collect. Currently, she provides regular employment at her shop to almost 6 women and girls. She is also a member of the Jharkhand Divyang Jan Manch (a state level forum for PWDs formed under CSS) and received the praise of the Chief Minister of Jharkhand for her achievements and contribution for economic stability of women and women with disabilities. CSS has also supported her for her daughter’s education and has been providing constant guidance to the family. Premnika is also a DPO leader and is a known face in her block. Premnika encourages more and more women to take up independent opportunities for a better tomorrow; she aims at estabilishing a clothing cum tailoring store at her block with the help of her special students. Premnika has gone through all kinds of hardships in life and has faced situations of poverty and discrimination, however she was always patient and didn’t let her positive and cheerful attitude fade away.

Md. Merajuddin stays with his family in Amroal village, Chauparan block of Hazaribagh district, Jharkhand. For Merajuddin has been affected by Autism Spectrum Disorder since his birth. His family members work as daily laborers. He used to look after his the goats at was depressed and not valued .

But with the commencement of the Jagruti project, he got a ray of hope to do something in life and make his contribution towards his family. Merajuddin completed his individual development plan, and livelihood basket assessment and received scientific training along with his father for goat-rearing in Holy Cross Krishi Vigyan kendra, Hazaribagh. With the help of Jaagruti Project he has now made the proper shed for his goats and is planning to buy more goats. His brotheris also willing to be a part of this business, has also arranged Rs 35000 and is also willing to make a model for Goat Rearing and a Breeding Center. 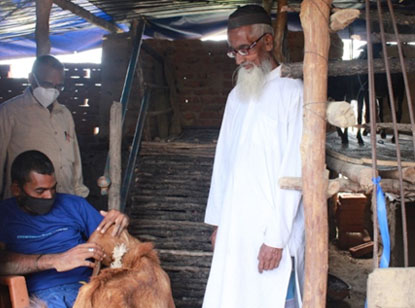 He said "the training and support provided by the Jaagruti team has made him live a respectful and meaningful life, now people look up to me for small helps." Project staff has also helped him get the Disability pension which was not coming since February . This business has not only made him confident but also helped to break the stereotype that a Disable person cannot work. 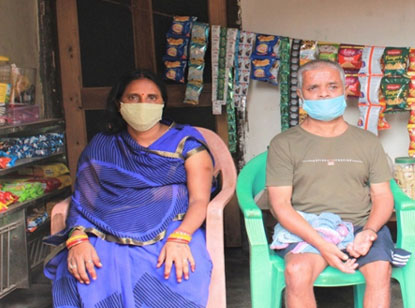 Lalo Das stays with his family in Chauparan block of Hazaribagh district, Jharkhand. For Lalo Das has been affected by Autism Spectrum Disorder since his birth but the paralysis attack has made his life even more tough. His Sons and wife run the house where as his daughters are studying .

His wife has taken funds of Rs 20000 from the SHG for the shop but the couple was not able to put in further investment in making proper furniture for the shop. But with the commencement of the Jaagruti project, he got a hope that he can give a better life to his family and can live his life with his head high. He has also started a small shop at National Highway in which the family sells the famous Kheermohan and Snacks and is willing to expand it. He said " Now as you can see my shop is full ,beautiful and growing, in the same way I will make my and my family's life more happy and prosperous."